Why does the death of my grandfather, a man I never met and my father hardly knew, fascinate me?

To bring war out of the history books, out of the television, the newspapers, out of one’s imagination, out of my imagination, I felt a need to retrace the final days of my grandfather’s life.

When my older brother mentioned he was going to France to find Opa’s grave, I had to go along. I wanted to make my history, my reality. I wanted to see and feel the place where the battles of Normandy freed a continent on the souls of so many men. I wanted to own the small fraction of that piece of history that was my heritage.

I don’t know much about my grandfather. He was born in Meerane Saxony Germany in 1897, a town near the Ore mountains. My father shared with me that my grandfather’s family came from many woodworkers. Some say this region is where many Western Christmas traditions came from: the Nutcracker, Christmas pyramids, and arches, and the famous smokers. He had served as a young man in WWI and received an iron cross for bravery. He was a musician and violin maker. He moved to the Netherlands during the Great Depression where he met my grandmother and settled in Den Hague. It was in Den Hague that he opened a violin shop. And it was here in February of 1943, when my father was only eight, that he was drafted at the age of 45 into Hitler’s war.

I wrote in a previous post, that my grandfather was in an anti-tank division stationed in the Netherlands until June 1944, when his company 657 panzerjager were sent to Normandy and deployed in St. Lo area.

In that previous post, I also stated we thought there was conflicting information about the location of my Opa’s death. A document my brother received from the German government said he died in La Varde, which my brother translated as Fort La Varde near St. Malo in Brittany.  A letter received by my step-great grandfather, in 1948, from a comrade who was with Opa at the time he died stated Opa died in a foxhole near St. Lo.

Well the mystery still remains, but I think my brother has found the best answer and that is in a small hamlet called La Varde on the Cotentin peninsula near St. Lo. This was the location of a battle located in the marsh surrounding the Taute river. Americans, under General Macon, were making their way towards St. Lo and discovered a small German stronghold on the hamlet of La Varde. American troops sludged through knee deep mud, threw grenades and fired rifles towards the ill prepared Germans in the late summer afternoon of July 17th, 1944.

My grandfather was killed instantly when a piece of flying shrapnel from a grenade sliced it’s way across his neck and through his jugular vein. He was in France for less than a month. It was probably his first experience in combat.

His body would lay in the muck of that marsh for a few days, until the fighting stopped and the dead could be collected and brought to a proper burial place. Opa’s last stand.

As I walked along the beach near Fort La Varde, the morning we were to visit his grave, I said a little prayer for my Opa. I wanted him to know my brother and I wanted to pay our respects, to say thank you for his sacrifice and to let him know that his legacy continues. I think he was tickled we were there and  we were thinking of him, a person we never knew. 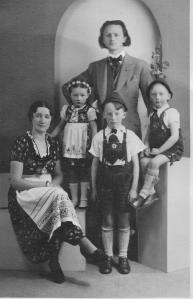 Last family picture, my father is the seated little boy.