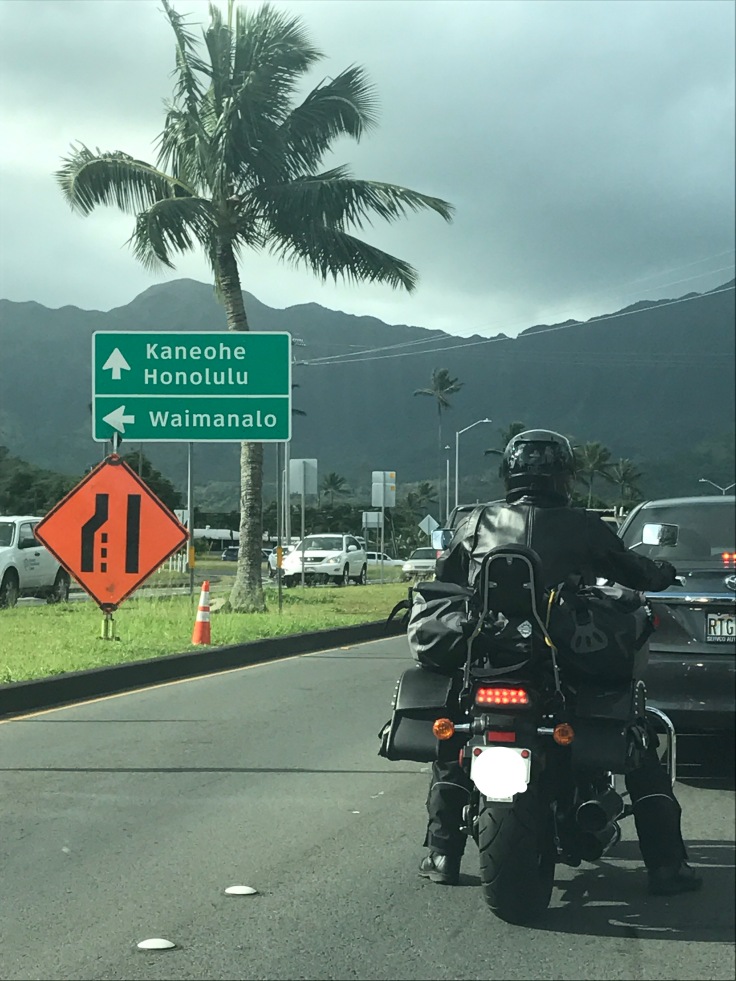 A picture is worth many stories.

This photo tells the story of island driving. There are surprise lane closures – for trimming back the overgrown foliage- that then cause backups. Then there is the motorcyclist who is ready for a long road trip in the Pacific NW with leather jacket, pants, and boots, plus several carriers. It took me a moment to realize the hilarity of the scene. Where was he going? Why was he dressed in all leather? He looked like he was ready for a cross country trip.

Contrast that with a story from earlier this week –  a young man, who was driving a scooter, was killed when his buddy, who was also driving a scooter, stopped for a pedestrian. He wasn’t paying attention or was going too fast and slammed into his friend and flipped over his handlebars and died from head trauma – no helmet.

The most amazing thing I have seen while driving here was yesterday. I was driving home after going to the farmers market at the Windward Mall in Kaneohe. A fire truck was coming up behind me as I sat at a traffic light – the turn lane was full, the two lanes of traffic were full and there was an island in the median strip. As the fire truck came closer all of the cars began to crawl to this side and that side, but that wasn’t enough to make room for the fire truck. The miracle happened when two cars went into the intersection, slowly and cautiously, through a red light. You heard me right, people here know what to do in that kind of situation.

In Seattle I have sat in dismay more than once when I see drivers who don’t know what to do when a service vehicle comes up behind them.

I was stunned when I saw those cars pull into the intersection. Could Hawaii have better drivers than Seattle?

Lastly, did I tell you how much I love the Shaka?

Getting Shaka’d when you let someone enter your lane is like a synergistic event. In Hawaii there is aloha in driving. You just need to be open to it.